Have a question? Submit it here! 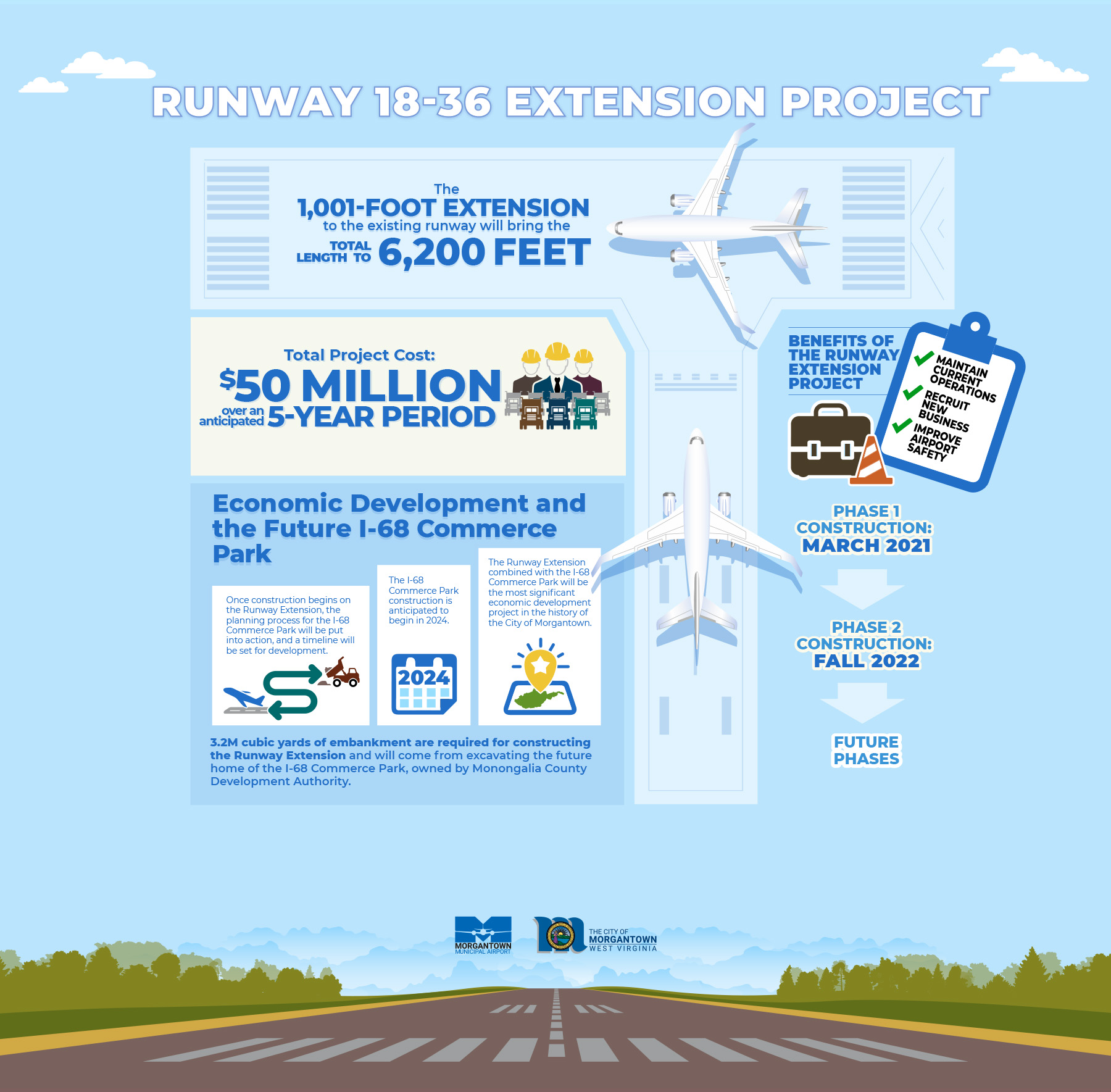 The City of Morgantown, in association with the Federal Aviation Administration (FAA), has released a Finding of No Significant Impact/Record of Decision (FONSI/ROD) based on the Environmental Assessment (EA) for Runway 18-36 Extension dated July 2019, which evaluated future development proposed at the Morgantown Municipal Airport. The City prepared the EA for a proposed 1,001-foot extension to Runway 18-36.

The EA was undertaken by the City and the FAA to fulfill the requirements necessary for compliance with the National Environmental Policy Act of 1969 (NEPA), its implementing regulations promulgated by the Council on Environmental Quality at 40 CFR 1400 et seq., FAA Order 1050.1F, Environmental Impacts: Policies and Procedures, and FAA Order 5050.4B, NEPA Implementing Instructions for Airport Actions. The EA documents the purpose and need of the project and the anticipated social, economic, and environmental impacts of the Proposed Action.

Based on the number of aircraft operations, the Morgantown Municipal Airport is the busiest airport in West Virginia. Its runway, however, is currently the shortest commercial airport runway in the state. The airport’s lack of a longer runway acts as a hindrance to attracting and retaining additional corporate jet traffic and charter service.

Extending the runway will also directly benefit WVU Athletics and support the University’s continued growth, partnerships, and the local economy. West Virginia University strongly supports the Runway Extension Project, and the administration has been pivotal in moving the project forward. Additionally, the benefits realized by the Runway Extension go beyond the City limits. This project has also received support from local businesses, the Monongalia County Commission, Star City, and the City of Westover.

The dirt needed for the construction of the runway will come from the future I-68 Commerce Park. Tied together with the Runway Extension, this will be the most significant economic development project in the City of Morgantown’s history.

Funding for the project will include assistance from the FAA’s Airport Improvement Program (AIP). The FAA provides AIP grants to airports for projects that enhance airport safety, capacity, and security or alleviate environmental concerns.

In November 2019, the City of Morgantown received concurrence from the FAA on the Draft Environmental Assessment and Benefit Cost Analysis. This was an essential step toward achieving the City’s goal of expanding and improving the airport to promote economic development and improve fliers’ safety.

The FAA’s Finding of No Significant Impact (FONSI), Record of Decision (ROD), and the Final Environmental Assessment are available from November 25, 2019 through December 20, 2019 on this webpage.

Construction of the Runway Extension Project began in March 2021. Phase 1 construction is in progress, which includes land clearing and embankment construction.